There had been two large Falcon manufacturers: ATMC and EFA. ATMC had used two sub-contractors, “Golden Horse” (B3) and “ECS Tamsui” (B5), EFA just one, “Ta Yuan” (Y4). EFA had been developing all Falcons since PCB rev. B. List of all Atari manufacturers here.

This is one big mess. According to this diagram in the Falcon030 service manual: 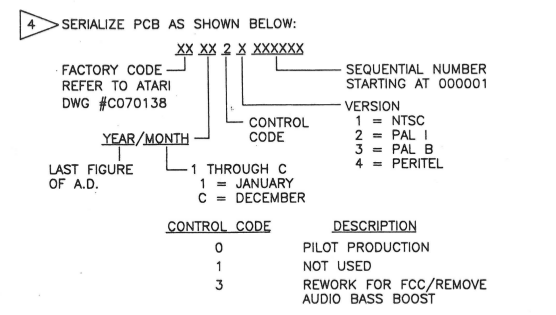 it should be pretty straightforward but it is not. There are several discrepancies:

From all the serial numbers I’ve seen so far one can conclude:

If we can trust the ECO statistics document, the last approval activity for Falcon stuff had happend around 06-07/1993.

Sometime in 09/1994 (judging from MK II serial numbers) C-Lab had ordered by EFA another batch for the MK II/X models which were delivered around 08/1995 according to this article in ST-Computer.

Another rather confusing fact is that revisions are not always related to manufacturing years. So it’s totally OK to see rev. D/C from 01/1994 and rev. J from 07/1993.

Still the question whether C-Lab had ordered something from EKA remains – the ST Computer article mentions MKII models still from the Atari batch but quoting C-Lab representatives about a C-Lab batch ordered from EFA directly, for later MKII and MKX models, so who knows? Altough it’s hard to understand why they would order another batch if they had 8,000 semi-completed units in stock?

Anyway, it has been verified on multiple occasions that C-Lab did reuse older boards for their “new” products – i.e. it’s normal to find a MKX with motherboard from 05/1993. So while Bob Gleadow’s numbers would put us somewhere between 17,000 - 18,000 built units (which is quite close to ~16,000 from serial numbers in 10/1993) I think the real count is closer to Rodolphe Czuba’s statement and many MKI/MKII/MKX simply reused already existing PCBs.